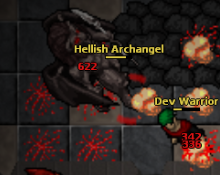 Zezenia Online is a free to play 2D MMORPG. You can become a barbarian, warlock or one of the 5 other subclasses and progress your character through hunts, dungeons, quests and challenge tasks. There is a large map to explore with 6 major cities on 4 different continents, with dangerous areas inhabited by over 150 monsters and bosses. The game also features a fast-paced PvP system, potion brewing and ingredient gathering, guilds, warzones and much more, with new features being implemented all the time.

Your journey begins in Eidos, a beginner city with various tasks and quests to level up your character. You can then travel to the capital city, Ellaria.

The map is already large (over 18 million squaremeters) and is being constantly expanded, with multiple game updates every year.

In addition to the 3 main classes, there are 7 subclasses: Barbarian and Paladin (Warriors), Marksman and Rogue (Rangers), Pyromancer, Shaman and Warlock (Mages).

Each class and subclass features their own set of spells, ranging from basic healing and areal attack spells to support spells such as invisibility, home temple teleport, creature summon, locate and anti-locate (soul vanishing). There are plenty of buff spells, which temporarily alter your (or your party members') character stats, such as speed, max health or skills. Some spells require more than 1 player cooperating to cast.

The game features a brewing system that allows you to brew potions by yourself, based on items gatherable from loot and items that are gathered via the gathering system.
Read more about Gathering and Brewing in our Game Manual »

There is also a fun player versus player (PVP) combat system. On PVP servers (Everath, Pharos, Platon) it is possible to attack other players at any time outside of protection areas (depots, player housing, shops). On Non-PVP servers (Elysium) attacking other players is only possible in arenas, party mode or during guild war.
Read more about PVP in our Game Manual »

Across the various continents you will meet monsters, ranging from simple dwarves to fierce boss monsters such as Birlusk Thyns and Keogruteras. You can choose to hunt alone or with friends in party-mode, which yields an experience boost based on the amount of members.
Read more about the Party Mode in our Game Manual »

The ingame economy is mostly player dictated, through individual safe trades and through the global market system, which supports both Sell and Buy offers.
Read more about the market system in our Game Manual »

Miscellaneous features include player housing, a 3vs3 soccer arena, player run guilds (with guild wars), fishing, the warzone (Veranga) and various in-city battle arenas where players can fight each others without fear of loss and much more.

The game client user interface is highly customizable, with both single and dual sidebar options and free placement of the sidewindows anywhere on the screen.
Register & Start Playing Now
Register now and get 3 days of Premium Time for free!